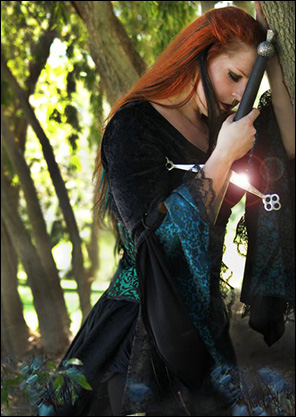 Tiffany graduated from California Institute of the Arts with her Master's Degree in Classical Vocal Performance. Her love for fantasy, stage combat, costumes and the rich traditions of grand opera have served as the foundations for her episodic legacy called Stelletwal. Her travels have taken her to Europe and Japan where she has gratefully experienced many cultures while communicating through the boundless language of music. Inspired by influential historical figures and timeless archetypes, Tiffany brings new life to Elves and Faeries exhibiting very human qualities while confronting and struggling with universal issues of honor, entitlement and personal growth. She currently lives in Los Angeles, California with her husband and their two cats.

A grey, nebulous expanse bridges the gap between good and evil. Circumstances force decisions, leading to either heroic or catastrophic outcomes, and there are vastly differing opinions which sway entirely on the perceptions of those in the wake of the aftermath. I have always found great interest in the archetypes who fall in this middle ground and when the muses chose me as a channel for their saga, I began sympathizing with them all for their noble ideals, honorable intentions and often painful motives. I am a classically trained singer, blessed to be surrounded with the sublime opulence of opera. I readily seek fantasy through Renaissance festivals and the performing arts, and while composers intricately weave a melody revealing strengths and weaknesses in a character, I have chosen a different medium for Stelletwal. When I was young, I made up songs for the colorful orbs playing near the woodpile in my backyard. Recently, an Apache Shaman told me Faeries were still around me even though they had vanished from my awareness long ago. I began to listen. This is their story.