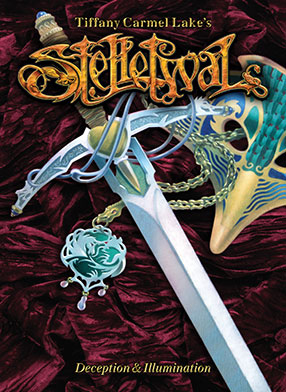 Medieval fantasy meets sword and sorcery as Kaliopy and Rinion's destiny leads them down paths tainted with deception and strife.

Since the dawn of recorded history, the Faerie kingdom of Stelletwal has forbidden the practice of magic outside her protected Temple walls. But an extraordinary new magic will be unleashed upon the world should the Elfin and Faerie bloodlines continue to mingle.

The enchantment surrounding the Faerie New Year offers unprecedented inspiration and romantic intrigue when the Princess Kaliopy meets Rinion, a mysterious Elfin Prince destined to inherit a kingdom on the brink of war. With the inevitable end to a constrained truce looming on the horizon, Kaliopy and Rinion put their combative skills to the test as they face shadowy beings with a vicious thirst for blood, a murderous brother presumed dead, a dormant power long forgotten and a mighty sorceress forced into exile. Generations of deception, prejudice and strife surface as the young couple uncover the truth of their pasts, confront the peril of their present and secure the glory of their future while clutching on to the only unmovable force in their lives: their love for each other.