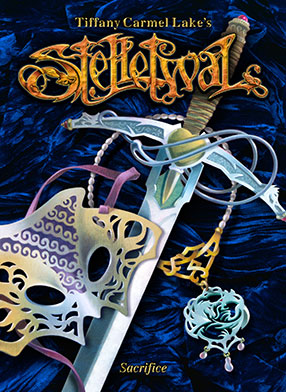 How much of yourself will you sacrifice?

Bestowed to King Ryshan in a truce, Princess Tsavryel is torn between loyalty and her beliefs when she compromises her future for the benefit of her homeland. But the war is not over. Pushed to her limits while executing her father's deceptive scheme, Tsavryel realizes her true allies and the key within herself for salvation. Meanwhile, the Faerie kingdom of Stelletwal has lost its king in battle against the relentless Pixins. Reluctantly, Altryune accepts the crown, but the ideals of a king are far different from those of a soldier. As Altryune struggles with his identity, friends Talinsyr and Endromyne confront their own challenges with their new roles in his life. A decision regarding the fate of Endromyne's sister Finyanna surfaces, as the young maiden rebels against Stelletwal's laws restricting magic. Facing the solitary consequences of her actions in the northern reaches of the forest, she is befriended by a mysterious Fay, who has a discomforting motive for keeping her alive.

Visit Stelletwal and the Western Clans one generation before the Faerie and Elfin kingdoms unite in Stelletwal Deception & Illumination. Two independent storylines serve as the foundations in this carefully woven prequel. This is Sacrifice.