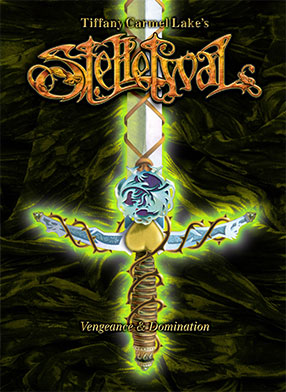 The result of every action yields consequences which can irreversibly turn the tides of life. Some are compelled to work quickly with passion and blind perseverance, motivated by narrow vengeance, entitlement and a lust for power. But there are those who are passive and slow to respond, fearful of the outcome, victimized and doubtful of their worth. Both extremes can be deadly and the lines between right and wrong often begin to blur.

The truce between the Elves of the Southern and Western kingdoms has ended, forcing King Rinion and Queen Kaliopy into war against the Southern Clans. The conflict escalates as the Southern Clans reveal their hidden strategies. But just days before the battle begins Azuryne, the High Priestess, is hesitant to commit Stelletwal’s magic to the cause as she doubts the foundation of her faith. Princes Rylan and Chalorys find evidence of an ancient weapon which could alter events further, sending the twins on an adventure far away from their homeland. As Rinion and Kaliopy turn their attention to the needs of their people, an old foe threatens to resurface. But there are others who can justifiably lay claim to the throne. The struggle will not cease after the King is dead.